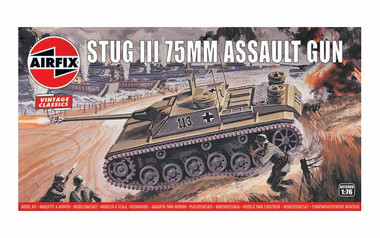 Mould Tools made in 1962, pack illustration by G.Schule, 1963. Enjoy the nostalgia with Airfix Vintage Classics.

The Sturmgeschutz (Stug) GIII was a turretless tank on a Panzer III chassis which enabled it to carry a formidable 75mm high velocity gun. This was used extensively in all theatres of the Second World War. They were used by other nations in the war including Finland and Romania.