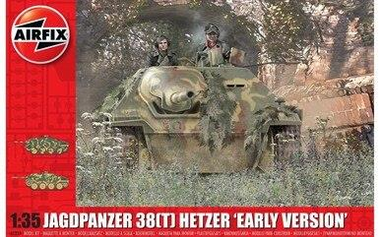 The Jagdpanzer 38 (Sd.Kfz. 138/2), later known as Hetzer ("baiter"), was a German light tank destroyer of the Second World War based on a modified Czechoslovakian Panzer 38(t) chassis. The project was inspired by the Romanian "Mare?al" tank destroyer.  The Jagdpanzer 38 was intended to be more cost-effective than the much more ambitious Jagdpanther and Jagdtiger designs of the same period. Using a proven chassis, it avoided the mechanical problems of the larger armoured vehicles.

It was built on the Panzerkampfwagen 38(t)‘s widened and lengthened chassis with modified suspension (larger road-wheels from Praga TNH n.A prototype reconnaissance tank) and up-rated engine. The new engine was 160 PS Praga AC/2 6-cylinder engine controlled by Praga-Wilson gearbox (5 forward and 1 reverse gear). Chassis was modified in order to accommodate larger gun and thicker armour than regular Panzerkampfwagen 38(t) tank. Its combat weight was 16 metric tons (versus 9.8-tonnes for the Pz 38(t) and it could travel at maximum speed of some 42 km/h.