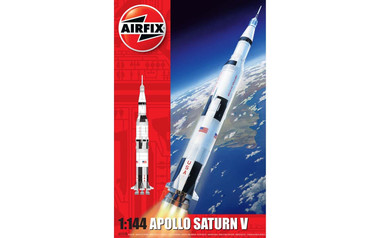 The Saturn V was the largest operational launch vehicle ever produced standing over 363 feet high with its Apollo Spacecraft payload, it produced over 7.5 millionpounds of thrust at lift-off. It enabled the crew of Apollo 11 and subsequent Apollo crews to leave the pull of the Earth's gravity and reach the moon.

Developed at NASA's Marshall Space Flight Center under the direction of Wernher von Braun, was the largest in a family of liquid propellant rockets that solved the problem of getting to the moon. The three stage rocket was taller than a 36-story building and was the largest, most powerful rocket ever built. A total of thirty-two Saturns of all types were launched; with not one failing. Thirteen of these were Vs. With a cluster of five powerful engines in each of the first two stages and using high-performance liquid hydrogen fuel for the upper stages, the Saturn V was one of the great feats of the 20th century engineering.

Inside, the rocket contained three million parts in a labyrinth of fuel lines, pumps, gauges, sensors, curcuits, and switches - each of which had to function reliably. The first manned Saturn V sent the Apollo 8 astronauts into orbit around the moon in December 1968. After two more missions to test the Lunar Module, in July 1969 a Saturn V launched the crew of Apollo 11 to the first manned landing on the moon.