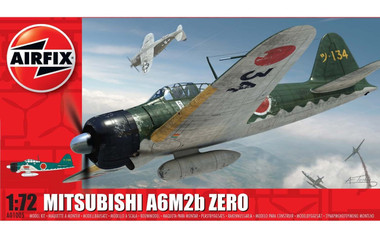 When the Japanese Zero first entered service in 1940, it was without doubt the most advanced naval fighter in the world and quickly earned a reputation as a ruthless dogfighter. In early engagements, the Zero proved so effective that pilots were able to post an almost unbelievable victory ratio of 12 to 1 against their adversaries.

As the Wehrmacht began its march across Europe in 1940, little attention was being given to developments in the Far East. Following years of re-arming and upgrading, the Japanese Navy could boast some of the most advanced naval aircraft in the world within its inventory, including the superb Mitsubishi A6M Zero. This long range Naval fighter would be at the forefront of Japan’s expansionist ambitions throughout WWII and in the early war years, proved to be unequalled in the Pacific region.

Possessing exceptional manoeuvrability, the Zero quickly earned a reputation as a dogfighter and Allied pilots quickly learned to avoid a slow, turning fight with this beautifully balanced aircraft. As the fighter aircraft to beat in the Pacific, American pilots soon developed tactics that avoided playing into the hands of the Zero and began to score victories. As newer fighters began to enter service, the A6M Zero began to show its weaknesses, which were a lack of armour protection for the pilot and no self-sealing fuel tanks in the wing. Using their ‘boom and zoom’ hit and run tactics, the Americans finally began to get the measure of the feared Zero.