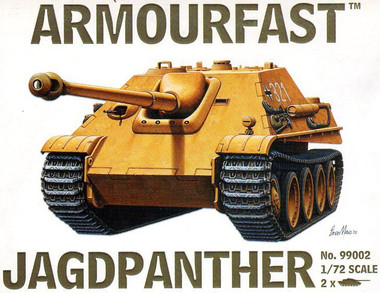 The JagdPanther was one of the finest tank destroyers of the war. Based upon the chassis of the formidable Panther tank but mounting the 88mm Pak 43/3 L71 gun. It was also well armoured with 80mm of well sloped frontal armour. This meant that when used as planned with the front of the vehicle pointed at the enemy the JagdPanther was an extremely effective tank-killer.

The JagdPanther was first issued to the 559th and 654th Panzerjägerabteilungen in June 1944 and was first used in action on 31st July 1944, when 3 JagdPanthers of the 654th surprised the Churchill tanks of S Squadron of the 3rd Battalion of the Scots Guards. Within 5 minutes, 11 of the Churchills had been destroyed.

All Armourfast kits come with 2 MODELS IN EACH BOX giving you the flexibility to produce the variation of your choice.