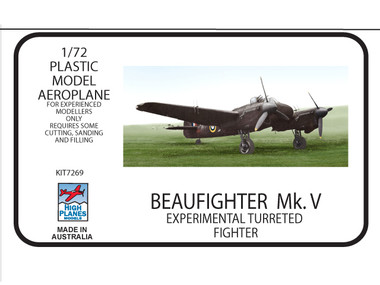 The Beaufighter II was a Merlin engined derivative of this famous WWII British fighter. It resulted when the RAF was faced with a shortage of Bristol Hercules engines, and this led to the adoption of the Merlin as an option. Including prototypes, some 450 were built. These machines were less powerful than the radial engined versions, and reportedly did not handle quite as well in the air. Although it filled a vital gap in the RAF, especially as a nightfighter,it was soon replaced in front line service by the Mk VI Due to the inititial difficulties of night inerception, it was suggested that the 4 gun turret as fitted to the Boulton Paul Defiant could be fitted behind the cockpit to allow the gunner a better opportunity to engage the enemy, allowing the pilot to focus on flying the aeroplane. In practice this did not work so well, and only two were built. This kit is supplied with decals for both aircraft.