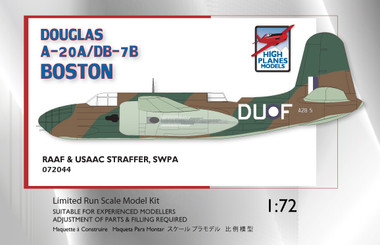 The Douglas DB7 was developed to a French Air Force requirement from an existing Dougles private venture.  The initial production was delivered to the French, but after the fall of France in 1940 the remainder were diverted to the RAF where it entered service as the Douglas Boston I.  Later versions were widely used by the US as the A-20 Boston and other Allied nations.

This kit provides the modeller with the first accurate mid production version of the A-20 Boston. The nose panelling is the painted over type as used by field modified Bostons.  Decals are included for one USAAF and two RAAF strafers in the South West Pacific Theatre of Operations.