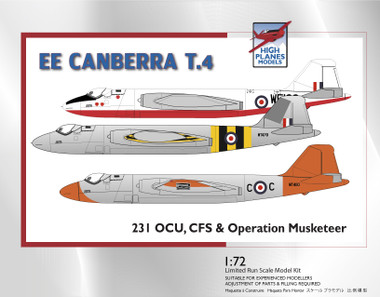 With the introduction of the first RAF jet bomber, the Canberra, it became obvious there existed a need for a conversion trainer. This was to be a ??minimum change?? aircraft, and while adequate, always suffered from overcrowding. This resulted from the need to squeeze two seats into a cockpit designed for one and a half...As there was not enough room for two ejection seats, two new non ejecting, and smaller ones were substituted. The instructors seat (on right) was on a pivot, it tilted forward to allow navigator in, backward to let student pilot in, finally upright and locked once instructor strapped in! The only other change was another set of controls for the instructor, and a solid nose, there being no need for bomb aiming. Naturally, the T Mk 4 bacame an essential part of the training syllabus in the OCU, and further, most squadrons were allocated examples for continuation training. The aircraft continued in service for more than 50 years, and of course was exported to most countries that operated Canberras. As the RAF reduced its squadrons, surplus aircraft were reworked for numerous new roles. Decals for 231 OCU, Operation Musketeer and the CFS.