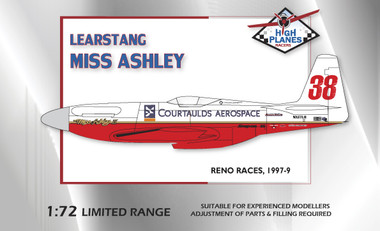 This High Planes Racers kit is a fine example of the unique XP-51 Learstang Miss Ashley II. Following the initial crash landing in the guise of Vendetta, the Lear wing was sold on and mated to a new build Mustang fuselage, complete with tall P-51H fin, and a Griffon engine with contra-rotating blades. First appearance at Reno 1997 where it showed its potential which was further exhibited at Reno 98. However, Reno 99 saw disaster as the aircraft broke up in flight and killed pilot Gary Levitz. It looked smart in its red and white paint scheme, and this model will be a tribute to people who push the limits.