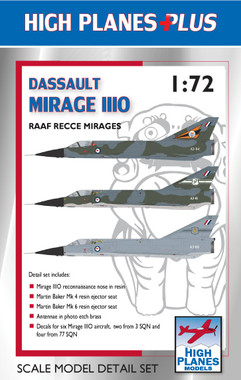 The RAAF operated the Dassault Mirage IIIO from 1964 to 1988 in interceptor and ground attack roles. The RAAF developed a reconnaissance nose to enhance the aircraft’s capabilities. This was based on the French / Israeli Mirage 5 nose and allowed a Fairchild KA56 panoramic camera to be fitted, photographing through a tent shaped window. The reconnaissance nose was interchangeable with the standard nose which gave useful operational flexibility.

This detail set includes the nose and markings for six airframes that are known to have used the recon nose, based on photographic evidence. The markings include two aircraft from 3 Squadron and four from 77 Squadron. 3 SQN served in South East Asia as part of the Five Power Defence Arrangements based at Butterworth, Malaysia and with regular detachments to Tengah, Singapore while 77 SQN was based at Williamtown, Australia just north of Sydney.

The aircraft from 77 SQN include the ‘grumpy monkey” marking based on a Korean lion and commemorating the unit’s service in Korea.

This detail set is designed to work with the High Planes Mirage IIIO.  With some adjustment it may be adapted to other kits.