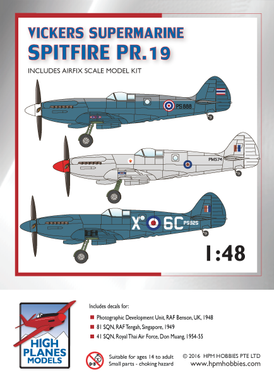 The Supermarine Spitfire PR.XIX was the final Photo Reconnaissance version of the Spitfire to see active RAF service. Produced by mating features of the MK.XI Spitfire to the powerful Griffon engine of the XIV, the PR.XIX was one of the fastest and some say best looking of all the Spitfire variants. Postwar it was redeisgnated the PR.19.

Due to its role as a reconnaissance machine it featured no armament, instead relying upon its high top speed to evade any potential enemies. After the war the PR.XIX served in the Far East, operating over Haninan Island and performing the RAF's last ever operational sortie by a Spitfire over Malaya on the 10th of June 1957.

This is an assembly kit. Paint and cement not included. Suitable for ages 14 to Adult