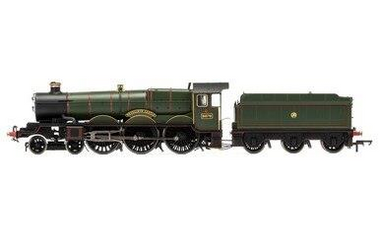 By the time Charles Collett took over from George Churchward as Chief Mechanical Officer of the Great Western Railway at Swindon in 1921, holiday traffic from London to Devon and Cornwall was demanding heavier trains and the GWR management were devoting proportionally more money and resources to West of England services, from Paddington, than to any other routes. Collett's solution was to take the basic 4-6-0 layout of the existing Star Class, keeping the same frame layout and wheel spacing and adding a newly designed No.8 boiler which was both larger and lighter.

The result was the GWR Class 4073, or ‘Castle’ Class, with which Collett could both supplement the Stars and replace them on the heaviest expresses. The Castle's tractive effort was 31,625lbs at 85% boiler pressure compared to the Star's 27,800lbs, whilst the grate area was increased to 29.4 ft2 in the Castle, from the 27.07 ft2 in the Star. The bar-frame bogie was of standard Swindon design, the superheater was the No.3 type as used in the Star and the top-feed device for introducing water into the boiler through the steam was of the standard GWR pattern.

The GWR publicity machine made much of the Castle’s roomy cab, with side windows and comfortable seats for the driver and fireman, with a canopy extending rearwards for shelter. The copper-capped chimney and polished brass safety-valve cover, along with a fully lined livery, was reinstated, a welcome change to the austere post-war look and on August 23, 1923, No.4073 Caerphilly Castle went on display at Paddington Station. The original tender attached to the class was the standard low-sided six ton, 3,500 gallon type, but despite the Castle’s average coal consumption being one of the lowest in the country it was changed for a 4,000 gallon design during 1926.

As the Castles became available, they were entrusted with many of the GWR’s high profile express services, including the Bristolian and the Cheltenham Flyer and they regularly registered high speed runs, 100mph being attained on several occasions. The advent of the 'King' Class locomotives in 1927 could have displaced the Castles from the main services but their restricted route availability because of their weight limited their rostering and the Castle' remained the most useful Great Western express passenger engines, operating right across the region.

From August 1923 to August 1950, 155 Castle Class locomotives were built new at Swindon Works, in ten lots for the GWR and two lots for British Railways’ Western Region and a further sixteen were converted from other classes. In 1932 there were improvements to the boiler and firebox area and further changes followed in 1946, when a higher degree of superheat was added to the Castle boiler.

From 1956 the fitting of double chimneys to selected engines, combined with larger superheaters, further enhanced their capacity for sustained high-speed performance, but by December 1965, the last of the class were withdrawn from traffic.

Locomotive No.5076 Drysllwyn Castle was built at Swindon in August 1938 and allocated initially to Exeter Shed, but in January 1941, whilst at Bath Road, the locomotive was renamed to Gladiator, one of twelve locomotives renamed to carry aircraft names.