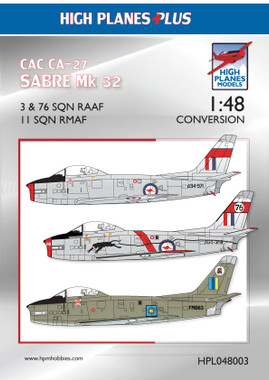 The CAC Avon Sabre was a unique aircraft in Australian military aviation history. It was the first all•metal jet fighter to be constructed in this country. The decision to produce the North American Aviation (NAA) F-86 Sabre, fitted with the Rolls-Royce Avon turbo-jet engine and up- graded armament in the form of two ADEN cannons, saw CAC embark upon a major re-design program. Because the Avon engine was lighter, shorter and of greater diameter than the General Electric J—34 engine which powered the NAA Sabre, CAC incorporated major structural changes in the Sabre fuselage, resulting in a total re-design of almost 40% of the fuselage.

The Avon Sabre gave sports car like performance as well as pakcing quite a punch. ln service the aircraft proved to be versatile and although no trainer variant was produced in Australia pilot conversion proceeded with reasonable speed. As NAA produced modifications to the basic design these were incorporated in CAC built aircraft. The slatted wing was replaced with the famous ‘six-three’ wing. Sidewinder missiles were fitted to the aircraft and even ground attack missions were incorporated within the aircraft’s repertoire.

The Sabre served operationally with 3, 75, 76, 77 & 79 Squadrons, and 2 OTU & 3 OCU between 1953-68. They were based in Australia and overseas serving in Ubon, Thailand and Butterworth, Malaysia under mutual defence treaties. The survivors were then refurbished and supplied to the Indonesian and Malaysian Air Forces.

This conversion was produced in partnership with Red Roo Models and includes a RAAF display scheme from 76 Squadron “Black Panthers” and three Rotal Malaysian Air Force aircraft from 11 Squadron.