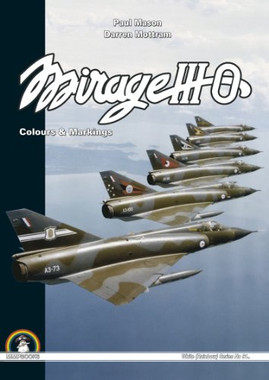 The Dassault Mirage IIIO is a variant of the highly successful French Mirage fighter produced in Australia. Numerous small changes were made in adapting the aircraft for RAAF needs, and these are accurately reflected in the kit. Based on many measurements of the real thing, much attention was put towards achieving a very high level of accuracy in shape and detail.

Darren Mottram & Paul Mason's Mirage IIIO Colours & Markings is best and most complete guide to this topic ever produced. The second edition has been released at last - excellent information about this type for an unbeatable price. Superb photographs and colour artwork to attract enthusiasts and casual browsers. The Dassault Mirage IIIO was the RAAF’s first supersonic combat aircraft, and served as its front-line fighter for over 20 years. During that time it wore a great many colour schemes, official and unofficial, and was adorned with many unit and individual markings.

For the first time, the evolution and details of all these colour schemes and markings is described and illustrated. The colours of this elegant aircraft changed with its roles and the changes in official thinking with regard to camouflage; the infamous Aussie sense of humour added some striking and unusual markings to Mirages over the years too! The authors have researched this topic in great depth, helped by access to official and private photo collections and the memories of Mirage pilots and ground crew. The manufacturers, Dassault, have also helped with information and photos of the very first Australian Mirages. Many of these photos are being published for the very first time, and they provide a striking visual record of the many colours carried by this much-loved French Lady - "The old adage often spoken about many aircraft rings true for the Mirage, if it looks right, it probably is right. The Mirage, in my opinion, was, is, and forever will be the most beautiful aircraft ever flown" (Paul Mason).