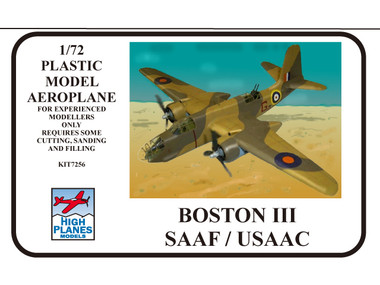 The Douglas DB7 was developed to a Fench Air Force requirement from an existing Dougles private venture.  The initial production was delivered to the French, but after the fall of France in 1940 the remainder were diverted to the RAF where it entered service as the Douglas Boston I.  Later versions saw service with the USAAF as A-20 and P-70.

The High Planes kit represents the early production A-20 or the most common of the RAF versions, the Boston III.  The model includes decals for early USAAF 6th Bomber Squadron 3rd Bomber Group A-20 in olive drab/neutral gray finish with white crosses as applied during the 1941 Carolina war games or Boston IIIs 'G' of 24 Sqn SAAF in North Africa in stone/earth/azure blue.