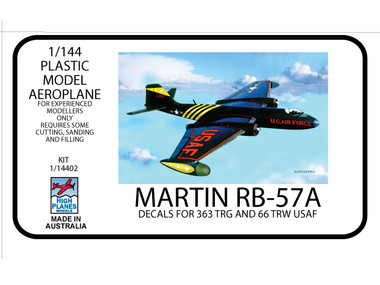 The USAF chose the British Canberra in preference to local competition to fulfill a low level night interdictor requirement. The aircraft had to be 'Americanised' for local manufacture, but externally looks same as its British parent. The Martin RB57A was a reconnaissance development of the Martin B57A Canberra. It served with the USAF in a tactical reconnassance role in Europe, the Far East and the continental USA. Two were used by the Federal Aviation Authority and two supplied to the Republic of China Air Force. The High Planes Models kit includes limited run plastic injection moulded parts from OzMods and two decal options.