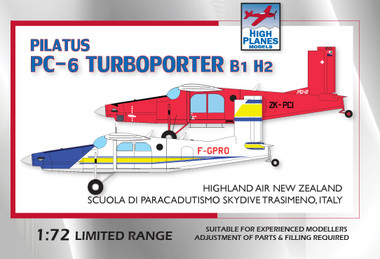 The Pilatus PC-6 Turbo Porter is a Swiss produced utility aircraft that first flew in 1961. Its superb short take off and landing (STOL) performance lead to it being adopted by many armed forces around the world, and it is a highly successful civilian design. This kit represents an early Turbo Porter, it has a new resin fuselage for the early aircraft, without the pilots doors, and a four blade resin propellor. Two colourful civillian operated options, with detail photos courtesy of Andrew Wallace, Highland Air.