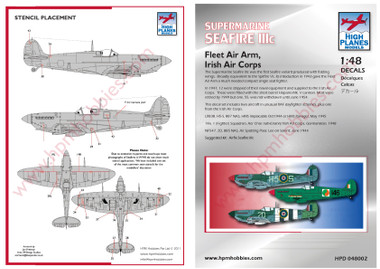 The Supermarine Seafire IIIc was the first Seafire variant produced with folding wings. Broadly equivalent to the Spitfire Vc, its intoduction in 1943 gave the Fleet Air Arm a much needed compact single seat fighter. In 1947, 12 were stripped of their naval equipment and supplied to the Irish Air Corps. These were fitted with the short barrel Hispano Mk. V cannon. Most were retired by 1949 but one, 55, was not withdrawn until June 1954.