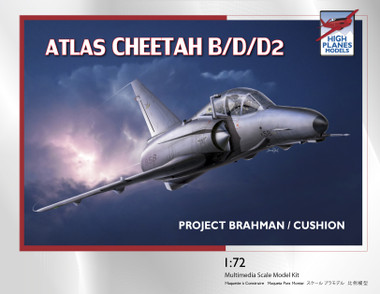 In 1981, the SAAF issued a requirement for a modernization program to improve the Mirage IIIs. With covert assistance from Israel Aircraft Industries (IAI), the local aviation company ATLAS Aircaft Corporation developed an upgrade package that included air to air refuelling capability, new avionics, flares and canards. This was based heavily on IAI’s work on the Kfir program, but retained the ATAR 9C engine. The General Electric J79 used in the Kfir was embargoed.
The first Cheetah was based on Mirage IIIDZ serial 845, and first flew in Israel in 1985. The first upgrade series was given the project name “Brahman”, with eight Cheetah D2 converted from IIID2Z airframes, plus five Cheetah B from Israeli supplied airframes. These was followed by “Project Cushion” delivering three Cheetah Ds based on surplus IIIDZs. ATLAS converted single seat IIIEZ airframes to Cheetah E standard at the same time.
The later “Project Recipient” added a modified undercarriage and the ATAR 9K engine.

The two seat Cheetah served with 89 Combat Flying School and 2 “Cheetah” Squadron from 1992 - 2008. It was replaced in service by the SAAB Gripen. Most of the remaining airframes were sold to Chile and Ecuador.

This kit includes three decal options from 2 Squadron. A later kit will include parts for a “Project Recipient” Cheetah.

We acknowledge the kind assistance of Piet van Schalkwyk during the preparation of the original kit.

ERRATA:  step 5 in some versions of the instructions refers to part A13 not F6.  F6 is correct