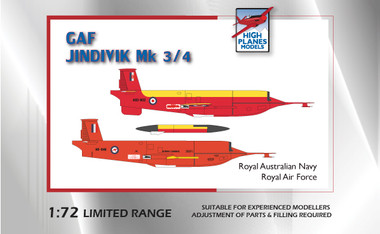 Jindivik was developed during the late 1940s and into the, early 1950s by Australia's Government Aircraft Factories (GAP) in response to a need by the RAF and RAAF for a cost effective, high performance target drone. One unusual aspect of development was that two manned examples, known as the Pika, ( and subject of a High Planes kit) were constructed and used for development work, with the first flight in October 1950.

To fulfill different missions, Jindiviks are able to be configured with many different equipment pods on the wings and fuselage, and several extended span wings can also be used depending on the altitude capability required during the mission Initial production Jindiviks Mk Is were very similar to the Pika (with the exception of the nose and cockpit area) but later variants from the Mk 2 onwards were fitted with more powerful Viper engines and incorporated many other changes, including the replacement of what must be the largest ever flush NACA type intake fitted to an aircraft with a more conventional open fronted type.

Jindivik is flown by a ground controller via radio control, take off being effected from a trolley, and landing being performed on a retractable skid in the belly. Typical missions for Jindivik include targets for fighter aircraft and ship defences, as well as radar targets for ground operators. When live firings take place, the intention is never to hit the Jindivik itself, but rather to aim for towed targets or achieve a near-miss with a missile, with the onboard equipment noting the miss distances for subsequent analysis.

Jindiviks are still operated by the RAF/RAE and the Royal Australian Navy, past operators including the RAAF/Weapons Research Establishment, Swedish Air Force with eight Mk 2 operated from 1959 till 1964, and the US Navy which operated 42 examples of the Mk 303 A from Pt Mugu during 1962. Over 500 examples had been produced by the time production ceased.  This kit represents the Mk 3 or Mk 4 version with the Mk 8/9 pods.