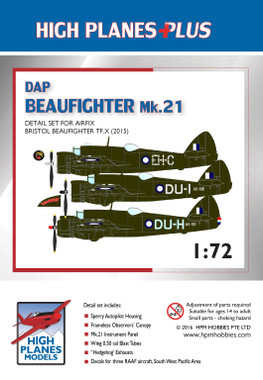 The RAAF requirement for a powerful twin engined fighter was evident as early as Feb 1939. As the Bristol built Beaufighter seemed to be the best choice, it was ordered in June of the same year.

The intention was always that the aircraft would eventually be built locally, but that did not eventuate until 1944. The Australian aircraft were based on the British Mk X, with some notable differences, 144 in total. The most obvious of these were the replacement of the 6 x .303 guns with 4 x .5in Brownings; the bulged nose for the Sperry autopilot; removal of the torpedo gear;a new gunners canopy and the deletion of the dorsal fin. The first was completed on 26 May 1944, and the last of 365, A8-363 on 10 Jan 1946. Decals for DU-I, DU-H and EH-C