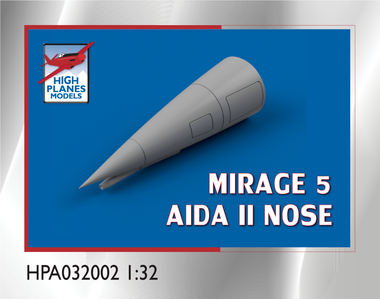 The Dassault Mirage IIIE was developed into the Mirage 5 aircraft after Israeli experience in the Six Day War. The main differences were the avionics from the bay behind the cockpit and rocket motor capability were removed, and an extra set of hard points added under the fuselage.  The Mirage 5 became an export success and the type continued into service well into the 21st century.

Later versions of the Mirage 5 had the Electronique Marcel Dassault (EMD) AIDA II solid-state fire-control radar was fitted in the nose. This version has a distinctively sharper nose than the early production and was fitted to the 50-01, 5COA (Colombia), 5D (Libya), 5PA (Pakistan), 5V (Venezuela), 5AD (Abu Dhabi), 5SDE2 (Egypt), 5M (Zaire), 5G and 5G2 (Gabon).

The set includes a single nose cast in polyurethane resin and is designed for the Italeri Mirage IIIE kit.