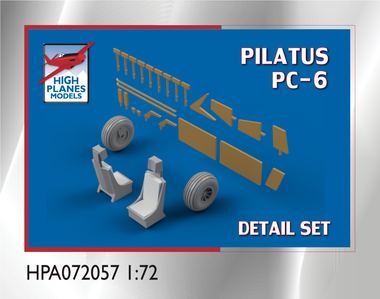 The Pilatus PC-6 Turbo Porter is a Swiss produced utility aircraft that first flew in 1961. Its superb short take off and landing (STOL) performance lead to it being adopted by many armed forces around the world, and it is a highly successful civilian design.

The antenna fit for the Turbo Porter was far from standard and there is a great deal of variation between subtypes & operators and over time. This set gives the modeller a number of the more common bits and pieces fitted.   The aircraft also had a number of steps and occcasionally a large mass balance fitted to the outer wings. These are included in the set.

A guide is included to highlight common arrangements. We recommend using this as a starting point and consulting photographs of the specific airframe. Hopefully we will give you an idea of what to look for.

The Turbo Porter could be fitted with larger diameter tyres to improve rough field operation, and a seat with improved safety features was fitted by some military operators.  This set includes a pair of oversize tyre wheels and two seats.