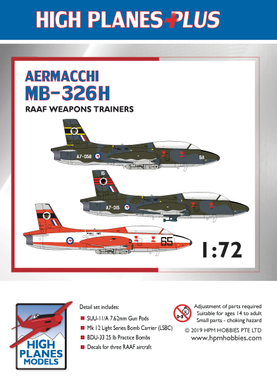 To help develop pilot weaponry skills, the RAAF & RAN fitted the GE SUU-11/A 7.62 Minigun pod and Mk12 Light Series Bomb Carriers (LSBC) to the Macchi. The weapons could be carried symmetrically or assymmetrically.  The Mk 12 LSBC were usually loaded with four BDU/33 Mk 76 25lb practice bombs, but were often used unloaded as removing the carriers was a long process.

This detail set includes weapons and markings for six airframes that are known to have been used as weapons trainers, based on photographic evidence. The markings include two aircraft from 2 Operational Conversion Unit and one from 76 Squadron.  This set includes additional code letters if you wish to model another airframe.