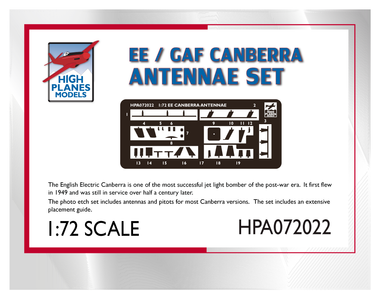 The English Electric Canberra is one of the most successful jet light bombers of the post-war era.  It first flew in 1949 and was still in service over half a century later.  The type was very adaptable and specialist variants for bombing [B], interdiction [B(I)], training [T], photo-reconnaissance [PR] and electronic intelligence gathering [PR - ELINT] were developed. The antenna and sensor fit for the Canberra was far from standard and there is a great deal of variation between subtypes & operators and over time.

This set gives the modeller a number of the more common bits and pieces fitted.

The antenna fit on Martin Canberras was significantly different and is not covered in this guide. The guide is intended to highlight common arrangements for the subtype.   We recommend using this as a starting point and consulting photographs of the specific airframe.  Hopefully we will give you an idea of what to look for.

The drawings are not to scale, but are useful for highlighting the different engine fits.  The instructions can be downloaded here  [Requires Adobe Acrobat reader]