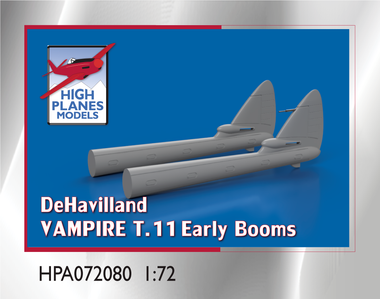 The Vampire T.11 began as a private venture based on the NF.10 night fighter. retaining the side by side seating but removing the radar and fitting an uprated engine.

Like the NF.10, the initial versions had tail fins with a bullet fairing similar to the FB.5 fighter. They were fitted with fixed seats and a canopy with framing above the crew. These were gradually replaced with extended fillets on the booms to increase lateral control. The fixed seats were replaced with ejector seats, which required a simplified canopy. Most production T.11 aircraft were to the improved standard and early versions in service with the RAF, RAN and RAAF were gradually updated with the improvements. There are many examples of aircraft fitted with later booms and early fixed seating, and vice versa.

This accessory set is designed to work with the Airfix Vampire T.11.