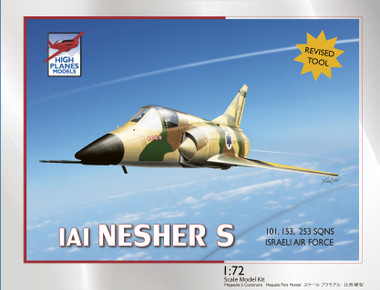 The Nesher was the result of the French embargo placed on Israel following the 1967 war. Israel had paid for 50 Mirage 5J fighters. They were shipped clandestinely to Israel and assembled locally as Neshers, 51 single seaters being produced. The first aircraft was delivered in 1972 and accounted for a quarter of the 450 Arab aircraft destroyed during the Yom Kippur War in 1973. Following 1978 and the introduction of the Kfir, all the survivors were sold to Argentina, where they continued to serve as the Dagger and finally Finger 1.

This kit is based on High Planes' original Nesher, but substantially improved using the latest computer aided design & manufacturing processes.