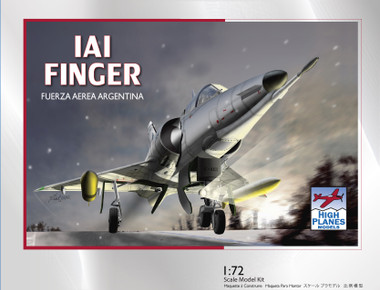 Following the experience operating the Mirage IIIC in the Middle East, the Israeli Air Force requested a new version from Dassult that had improved range and payload. Before they could be delivered the French government imposed an arms embargo. The Israelis later covertly obtained some aircraft, copies of the blueprints and began production locally as the Nesher (Eagle). Between 1969-1971 51 Nesher S aircraft were delivered.

The Nesher was phased out in Israeli service by the improved Kfir, and the remaining aircraft were refurbished and sold to Argentina. 35 were delivered between 1978 and 1980 and they served in the Fuerza Aérea Argentina as the Dagger A.  The FAA Dagger squadrons saw active service during the Falklands / Malvinas War when the British Task Force arrived at the islands.

Following discussions between the FAA and Israel Aircraft Industries, a ground attack upgrade based on the Israeli Kfir but retaining the SNECMA engine was developed. These fitted new French & Israeli avionics and had the distinctive “Kfir” stye nose. The aircraft were converted in batches and renamed Finger. One airframe (C-408) was upgraded as Finger I, two as Finger II (C-405 & C-427) and remainder of the surviving Daggers as Finger III. The Finger aircraft have been continuously upgraded since completion with newer systems.\

The High Planes Models kit includes revised tool injection moulded plastic parts, injection moulded canopies, photo etched brass aerials and three decal options from the FAA, all from Escuadron 1, Grupo 6 de Caza at Tandil Air Base.  As a bonus, it also includes a short guide to Latin American Mirages showing which alternative parts included in the kit can be used to build: