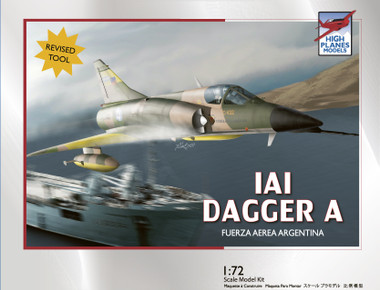 The Dagger formed the backbone of the Argentinian air power during the 1980s, particularly so during the Falklands/Malvinas conflict. They were ex-Israeli Nesher aircraft upgraded before sale. The Nesher itself was a locally assembled version of the French Mirage 5 optimised for ground attack and lacking the Cyrano radar of the Mirage IIIC and IIIE.

This kit was based on High Planes' original Dagger, but substantially improved using the latest computer aided design & manufacturing processes. Decals provided for three aircraft that served with the Fuerza Aérea Argentina during the conflict.