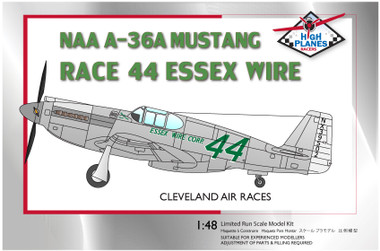 The later P-51D Mustang is most well known as the racing variant of choice, but immediately post war several Allison engined P-51A Mustangs and A-36A Apaches were prepared for racing. NX-39502 was one of these. This aircraft was originally owned by the ESSEX WIRE CORP. and was raced as Race 44 in the 1947 Bendix Trophy. There it was flown by Kendal Everson, who came 2nd at 377.926 mph.

James Hannon was the back-up pilot for the ESSEX WIRE CORP. and bought the aircraft in 1948. While practicing for the 1949 Thompson Trophy, he nosed over and slightly damaged the prop. Using his Mk. 1 eyeball, he ground the tips off square, and completed the race, coming 8th at 300.396 mph. This racer is also available from High Planes.