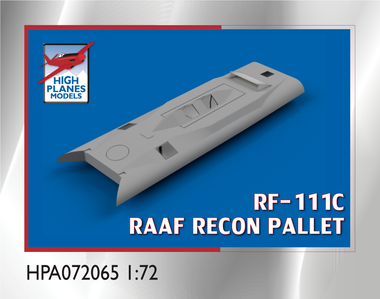 The tactical and strategic reconnassaisance missions of the RAAF had been met by the GAF Canberra and Dassault MIrage IIIO. Both these were to retire in the 1980s, leaving a capability gap. The RAAF purchased the designs for a reconnaissance pallet that could fit the F-111 weapons bay from the USAF. Four aircraft were converted between 1979 and 1980 to use the new systems: A8-126, A8-134, A8-143 and A8-146. A8-136 crashed in 1977 and the others were withdrawn from service in 2010.  The aircraft could operate with the full range of F-111C stores.

The conversion includes a clear pallet and plastic card to make the vent cover.  It is designed for the Hasegawa F-111C and replaces kit part 06/B23

Some of the moulds and masters from the Plane Bits range were passed to HPM and we are selectively remastering or re-releasing these in his honour. RIP.