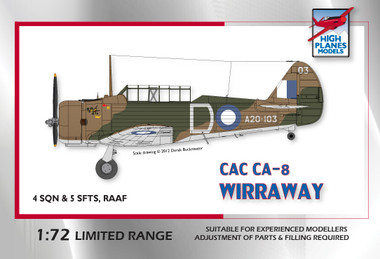 The CAC Wirraway was developed from the North American NA-16 trainer to meet RAAF needs. It was used by the RAAF during the Second World War as a reconnaissance and general duties aircraft in the Pacific Theatre, and post war as a trainer. 755 were produced between 1939 and 1946. This kit was moulded for High Planes by Ventura in New Zealand. It therefore looks a bit different in its layout to our later and current releases, but certainly still exhibits the overall accurate shape, finely recessed panel lines, and attention to details displayed by all High Planes models. The kit includes markings for the famous A20-103 which shot down a Japanese Zero, and an overall yellow WW2 trainer. Ventura also issued a boxing of this kit with different decals.