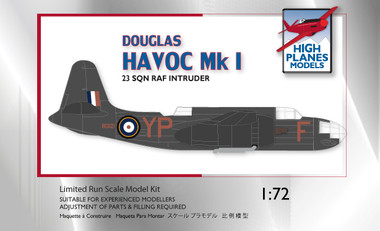 The Douglas DB7 was developed to a French Air Force requirement from an existing Dougles private venture.  The initial production was delivered to the French, but after the fall of France in 1940 the remainder were diverted to the RAF where it entered service as the Douglas Boston I.  A number of these were converted for nightfighter and intruder operations, known as the Havoc I.