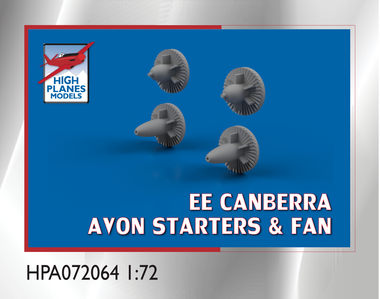 The English Electric Canberra is one of the most successful jet light bombers of the post-war era. It first flew in 1949 and was still in service over half a century later. The type was very adaptable and specialist variants for bombing [B], interdiction [B(I)], training [T], photo-reconnaissance [PR] and electronic intelligence gathering [PR - ELINT] were developed.

The drawings in our Canberra Sensor and Antenna set is useful for highlighting the different engine fits.  There are four different starter cartridge holders used in the Canberra family:

This High Planes accessory set includes the British 9Mk2 and 10Mk3 streamlined starters and fans, suitable for Avon 101 and 109 engines. The set is designed for the S&M kit but can be adapted for other Canberra kits including the High Planes ones.