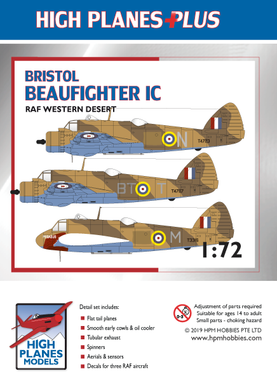 The Bristol Beaufighter was a development of the successful Beaufort light bomber.  It entered service with the RAF in 1941 and subsequent versions continued in use well into the 1950s.  The Beaufighter IC variant was developed for the Coastal Command and was the first Beau that could carry bombs for strike duties.   Most were fitted with Automatic Direction Finding (ADF) and Standard Beam Approach (SBA) systems to assist navigation and blind landing.

In late 1941, 252 & 272 Squadrons of the RAF Coastal Command were re-established at Idku near Alexandria to support the effort in North Africa.  The missions included escort and strikes with cannon, bombs and torpedoes.  The squadrons targeted German and Italian shipping and ground elements.

This High Planes Plus Pack includes the parts and decals to build an accurate 252 or 272 SQN Beaufighter IC.

This detail set is designed to work with the Airfix Bristol Beaufighter TF.X (2015 tool).