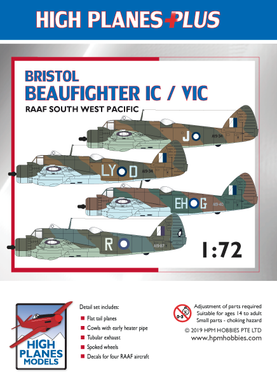 The Bristol Beaufighter was a development of the successful Beaufort light bomber. It entered service with the RAF in 1941 and subsequent versions continued in use well into the 1950s.

The Beaufighter IC variant was provided to the Coastal Command and was the first Beau that could carry bombs for strike duties. The Mk VIC was an improved version with uprated Hercules engines, torpedo capability and other changes. While the early versions were superficially the same as the IC, the tail planes of the later version had a marked dihedral. Most were fitted with Automatic Direction Finding (ADF) and Standard Beam Approach (SBA) systems to assist overwater navigation, but the latter appears to have been removed on arrival in Australia.

The RAAF received 72 Mk IC and 64 Mk VIC which were used for strike missions in the South West Pacific.

This High Planes Plus Pack includes the parts and decals to build an accurate IC or early VIC, in service with 30 & 31 Squadron.

This detail set is designed to work with the Airfix Bristol Beaufighter TF.X (2015 tool).
Scale: 1:72