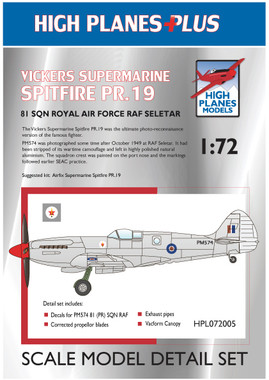 The Vickers Supermarine Spitfire PR.19 was the ultimate photo-reconnaisance version of the famous fighter. After a valuable contribution in WWII, the type continued to serve in the postwar Royal Air Force.

81 Squadron served as a fighter bomber squadron in Europe and the Far East but was dibanded in June 1946. 684 Squadron was renumbered as 81 Squadron in September 1946, purely as a photo-reconnasiance squadron. It was equiped with Mosquito PR.34s and Spitfire PR.19. It was based at RAF Seletar in Singapore until disbanding in January 1970 with the run-down of the Far East British forces.

PM574 was photographed some time after October 1949 at RAF Seletar. It had been stripped of its wartime camouflage and left in highly polished natural aluminium. The squadron crest was painted on the port nose and the markings followed earlier SEAC practice.

This detail set is designed to work with the Airfix Spitfire PR.19 (2009) kit.  With some adjustment it may be adapted to other kits.