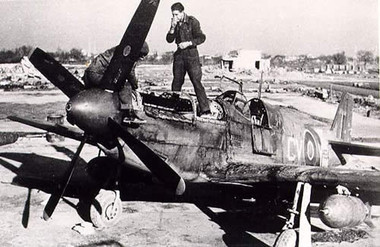 The North American (NA) P-51 Mustang was a revolutionary aircraft, the combination of superb design and an outstanding power plant. The Royal Australian Air Force operated the Mustang in Europe with the Royal Air Force command structure. Mustangs were imported into Australia at the conclusion of World War Two, arriving in the fighter squadrons too late to see active service. However, the aircraft performed valuable service in Japan as part of the occupying force and then in Korea. At home, the Mustang was used extensively in a variety of roles; fighter, ground attack, training, research and development, photo reconnaissance and in the development of nuclear weapons.

A short technical description of the Mustang is included in this profile. Written in plain English, it describes the construction of the Mustang and the differences between aircraft built by North American Aviation and the Commonwealth Aviation Corporation (CAC). Researched by Red Roo Models research assistants, one of whom has restored and operates a CAC Mustang, this section is devoid of mind-numbing technical facts and figures.

The easy to read text covers the history and construction of the Mustang, the Royal Australian Air Force Mustang squadrons, European and South West Pacific Area operations, the occupying force in Japan and the Korean War operations. As well, the book covers model kits, after market accessories, super-detailing and decals.

An extensive photo gallery shows Australian Mustangs and is supported by a large portfolio of drawings taken from the various NA and CAC Manuals. Extensive data tables cover colour schemes, national markings, construction numbers, data and dimensions. The Mustang Colour Box details the model paints required to achieve the correct authentic finish. The importance and relevance of Dull Dark Green, Deep Bronze Green and Matt Black, as well as their use on the Mustang are discussed. An extensive fleet list covers all Royal Australian Air Force Mustangs (excluding Europe), detailing the history and fate of each aircraft. For the first time the correct construction numbers are quoted. This book is even better than the well received Mirage guide!

All photographs in the book are black and white half-tones of exceptional clarity. The book is laser printed, using a desktop publishing system and is spiral bound to allow the modeller to lie it flat on the modelling bench when using it. The book is protected by a stout cardboard cover at the rear and a clear plastic cover at the front. The book is made up of 180 printed pages and is printed on 80 gsm tight weave paper. The book weigh approximately 450gms. Over 100 photographs, 54 drawings taken from various NA and CAC manuals and 14 tables support the text. "The Modeller's Guide To The Royal Australian Air Force Mustang" is published in a limited edition of 500 copies. Each book is printed to order, numbered and signed by the author.
Publisher: Red Roo Models
Pages:  180