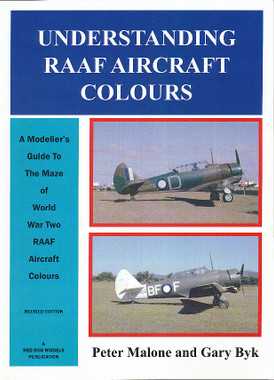 RAAF enthusiasts - this is the book you have been waiting for! This book attempts to chart a course of explanation and illumination through the maze of confusion that surround World War Two Royal Australian Air Force colour scheme. It is written in plain English. It is produced by means of desktop publishing and laser printed so that the photographs contained within it are exceptionally clear, unlike many commercially produced half-tones. Some 21 photographs, three illustrations and six tables support the text. All photographs in this book are black and white.

A simplified theory of colour perception is included in the book. Originally, this book began life as an article for an Australian modelling magazine and has been expanded and revised to incorporate additional features. The book is designed for new comers to the modelling scene as well as for older hands. Consequently, time is spent examining the various colour guides available to the modeller today. Each is critically examined. The concepts and uses of both the British Standard and US Federal Standards publications are explored. The book includes a comparison table of major modelling authors' colour matches. A complete Royal Australian Air Force (RAAF) K3 specification listing (for aviation paints) is incorporated. The K series documents have promulgated official RAAF policy on colours and camouflage patterns since the service was incorporated and continue to do so today. Specially selected photographs are used to de-bunk some popular myths about RAAF colour schemes.

Close attention is paid to the finishes of aircraft supplied by both the United Kingdom and the United States of America. This book is sure to raise as many questions as it answers and is an essential reference for any serious modeller interested in WWII RAAF colour schemes.
Publisher: Red Roo Models
Pages:  40
Authors:  Peter Malone & Gary Byk